15 Logical Fallacies You Should Know Before Reading CUPE Responds.

HOW DO YOU FEEL ABOUT CHILD PROTECTION SOCIAL WORKERS TAKING OFF THEIR LANYARDS AND PUTTING ON THEIR UNION PINS TO FIGHT AGAINST PROFESSIONAL REGULATION?

What is a Logical Fallacy?

A logical fallacy is an error in reasoning common enough to warrant a fancy name. Knowing how to spot and identify fallacies is a priceless skill. It can save you time, money, and personal dignity. There are two major categories of logical fallacies, which in turn break down into a wide range of types of fallacies, each with their own unique ways of trying to trick you into agreement. 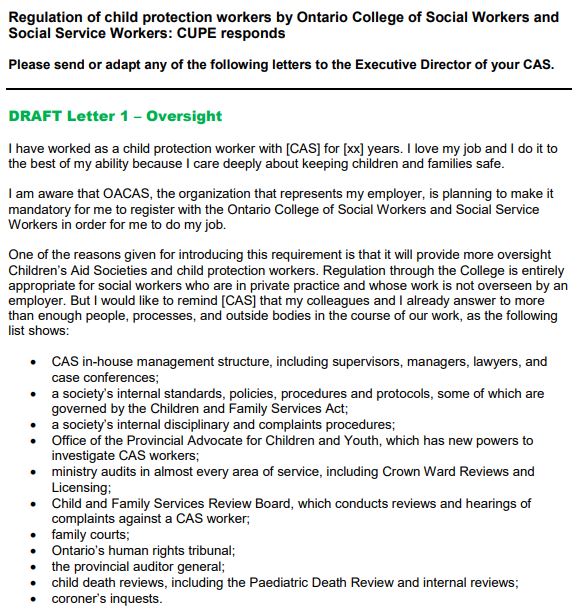 How could anyone look at this list and possibly think that child protection workers need more oversight? Asking for more ways to regulate and oversee the work of child protection workers is clearly unnecessary and leads me to think there is another agenda at work in this exercise.
I’m calling OACAS out on this spurious attempt to bring more oversight to our sector. Regulation will not make children safer; instead, it is distracting attention from what’s really needed to improve safety for children and youth and I hope that [CAS] will back me up on that.
AND YET DESPITE ALL THESE EXTRAORDINARY MEASURES BETWEEN 90 TO 120 CHILDREN DIE IN CARE EVERY YEAR, THE SYSTEM IS FULL OF FAKE EXPERTS SNATCHING AND OVERMEDICATING CHILDREN AGAINST THEIR WILLS LEFT AND RIGHT WHILE THE PDRC LABELS EVERY DEATH IN CARE AS - "UNPREVENTABLE." IS IT ANY WONDER WHY THE WORKERS ARE HAPPY CURRENT INTERNAL OVERSIGHT SYSTEM THAT NEVER HOLDS ANY OF THEM ACCOUNTABLE OR RESPONSIBLE FOR ANY OF THE HARM CAUSED BY THEIR ACTIONS. 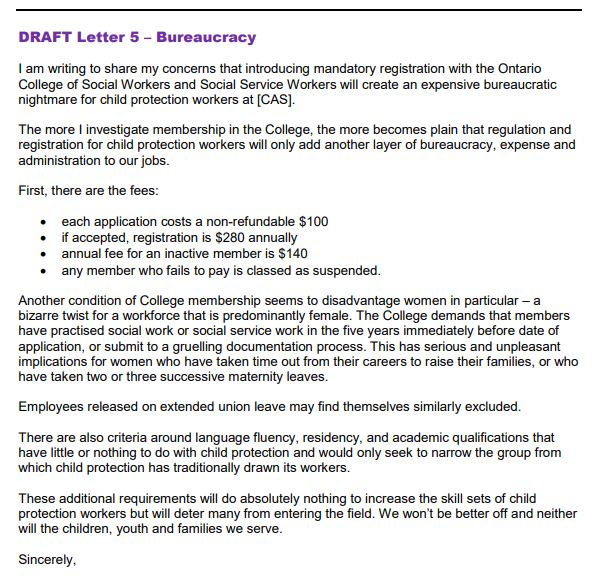 Here are some facts and figures I think point to significant problems for the child welfare sector and for CAS in particular when it comes to reviewing the credentials of their "hand picked" experts who provide the results they want when they want them:
• There are over 5,000 child protection workers in Ontario (5160)
• The College regulates about 17,000 social workers and social service workers
• In Ontario, only 7% of College-registered social workers are employed by a CAS
• Only 4% of members of the Ontario Association of Social Workers work for a CAS
• Between 30% and 50% of Ontario’s child welfare workers do NOT hold a BSW
• Only 63% of direct service staff in CASs have a BSW or MSW (in 2012, it was 57%)
• Only 78% of direct service supervisors have a BSW or MSW (in 2012, it was 75.5%)
• The 2013 OACAS Human Resources survey estimates that 70% of relevant CAS job classifications would qualify for registration with the College (so about 1500 CAS currently employed workers would be unable to register with the College)
• From 2002 to 2014, 41 child welfare employees who did not hold a BSW or MSW submitted equivalency applications to register as social workers; only 16 were successful and 25 were refused. (was the test to hard for them and cause for concern, are those 25 who couldn't pass the test still loose on the streets...?)
http://cupe2190.ca/wp-content/uploads/2016/11/SSWCC_CAS-letters-re-colle... 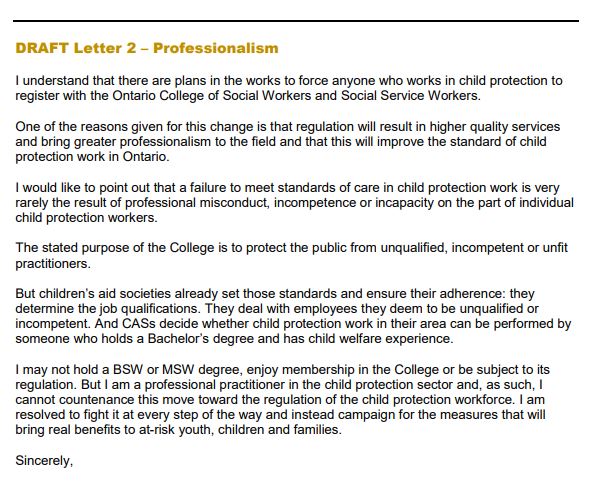 "Child, Youth and Family Services Act, 2017 proclaimed in force."
The new regulation was updated to only require Local Directors of Children’s Aid Societies to be registered with the College.
The majority of local directors, supervisors, child protection workers and adoption workers have social work or social service work education, yet fewer than 10% are registered with the OCSWSSW.
Unfortunately, many CASs have been circumventing professional regulation of their staff by requiring that staff have social work education yet discouraging those same staff from registering with the OCSWSSW.
Ontarians have a right to assume that, when they receive services that are provided by someone who is required to have a social work degree (or a social service work diploma) — whether those services are direct (such as those provided by a child protection worker or adoption worker) or indirect (such as those provided by a local director or supervisor) — that person is registered with, and accountable to, the OCSWSSW.
Submission-re-Proposed-Regulations-under-the-CYFSA-January-25-2018. OCSWSSW May 1, 2018
https://www.ocswssw.org/wp-content/uploads/2018/01/OCSWSSW-Submission-re...
http://www.ocswssw.org/resources/legislation-submissions/
If you have any practice questions or concerns related to the new CYFSA, please contact the Professional Practice Department at 416-972-9882 or 1-877-828-9380 or email practice@ocswssw.org. 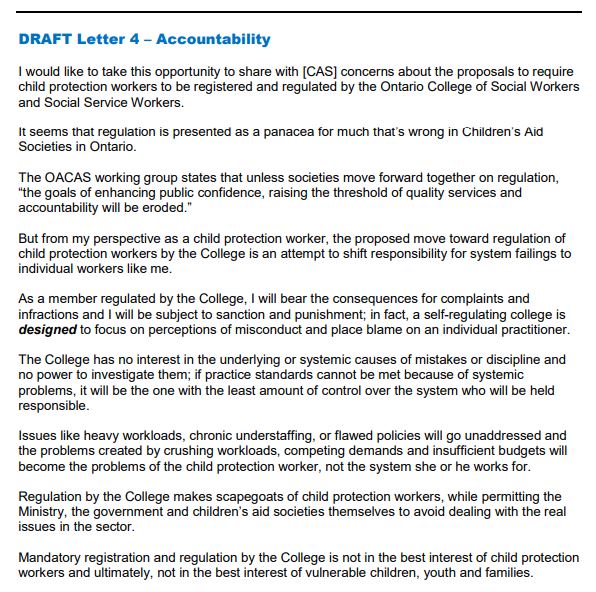 Without the deterrents professional regulation provides what prevents child protection social workers from being or becoming a danger to children and their families?
The union representing child protection social workers is firmly opposed to oversight from a professional college and the Ministry of Children and Youth Services, which regulates and funds child protection, is so far staying out of it.
The report Towards Regulation notes that the “clearest path forward” would be for the provincial government to again legislate the necessity of professional regulation, which would be an appallingly heavy-handed move according to OACAS/Cupe.
http://joincupe2190.ca/files/2015/10/Professional-regulation-at-children... 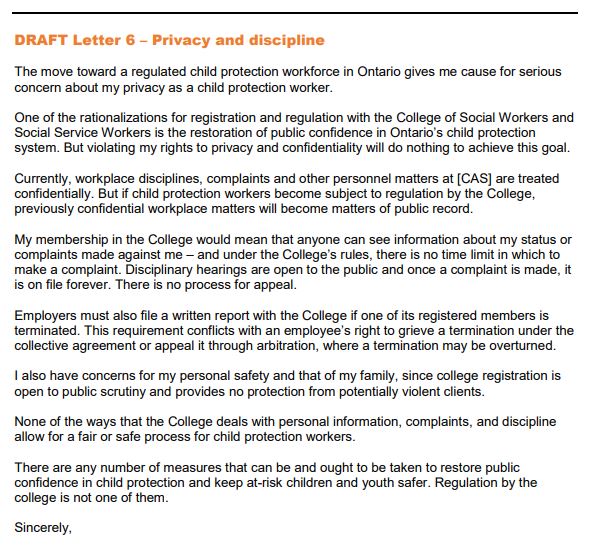 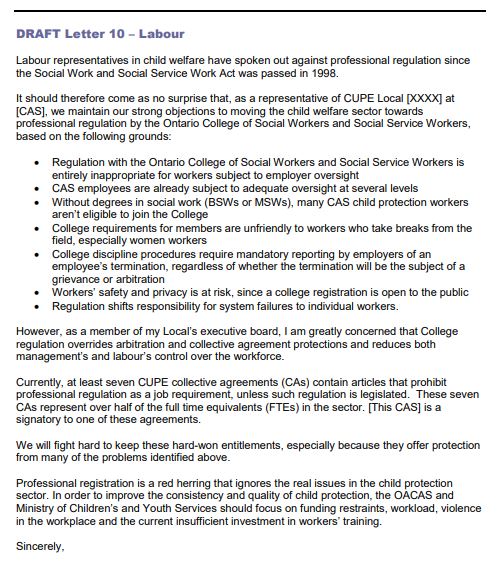 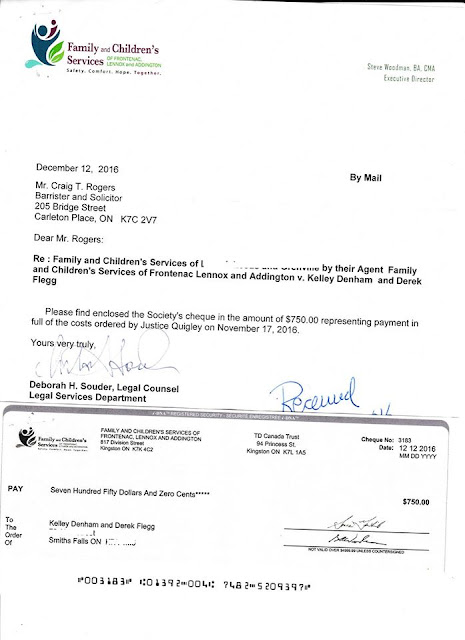 Ontario CAS Dirty Tricks:
There's a knock at the door, it's after dark Wednesday and we weren't expecting anyone. We're a bit worried it's the worker wanting to come in again. We go to the door, it's a same day courier and he wants us to sign. We've been served.
We have to respond to the worker's concerns, swear in the responding documents and serve them before the end of that coming Friday. Two days to do what lawyers take weeks to do. We have a little over a week till the first appearance....
READ THE FULL STORY HERE:
http://unpublishedottawa.com/letter/153438/ontario-cas-dirty-tricks
This is very much a first, as far as I can tell. “Mr. Rogers, it will be a short retainer”
CAS ordered to pay my legal costs after Judge rules they unnecessarily brought our family to court, at the cost of Ontario tax-payers. One month later, I have the cheque in hand. Visit kelleyandderek.com
http://unpublishedottawa.com/letter/116313/%E2%80%9Cmr-rogers-it-will-be...
:::

Silenced, discredited, stripped of powers of moral appeal, and deprived of the interpersonal conditions necessary for maintaining self-respect and labeled "disgruntled" many people suffer from serious but subtle forms of oppression involving neither physical violence nor the use of law.

In Civilized Oppression J.Harvey forcefully argues for the crucial role of morally distorted relationships in such oppression. While uncovering a set of underlying moral principles that account for the immorality of civilized oppression, Harvey's analyses provide frameworks for identifying morally problematic situations and relationships, criteria for evaluating them, and guidelines for appropriate responses. This book will be essential for both graduates and undergraduates in ethics, social theory, theory of justice, and feminist and race studies.

This book discusses how civilized oppression (the oppression that involves neither violence nor the law) can be overcome by re-examining our participation in it. Moral community, solidarity and education are offered as vibrant strategies to overcome the hurt and marginalization that stem from civilized oppression.