The Race for 24 Sussex

For interviews, or to find out about our services, please contact Bruce Anderson at banderson@abacusdata.ca (613-882-0929) or CEO David Coletto at david@abacusdata.ca  (613-232-2806)
This post is authorized by Abacus Data. Mulcair most popular, but has lost ground

After soaring from April of this year, our latest survey shows a softening of impressions of NDP Leader Thomas Mulcair. His positives sagged slightly (2 points) to 39% and his negatives jumped 5 points to 21%.

For Stephen Harper, the news is worse. Positive feelings about the PM have hit a new low of 25%, down 9 points from his level in February of this year.  His negatives hit a new high of 50%, up a remarkable 16 points from December.

For Justin Trudeau the news is that he has held the gains we saw in our last wave of surveying. His positives are 36%, and his negatives 29%. His net score is 10 points better than it was in July. 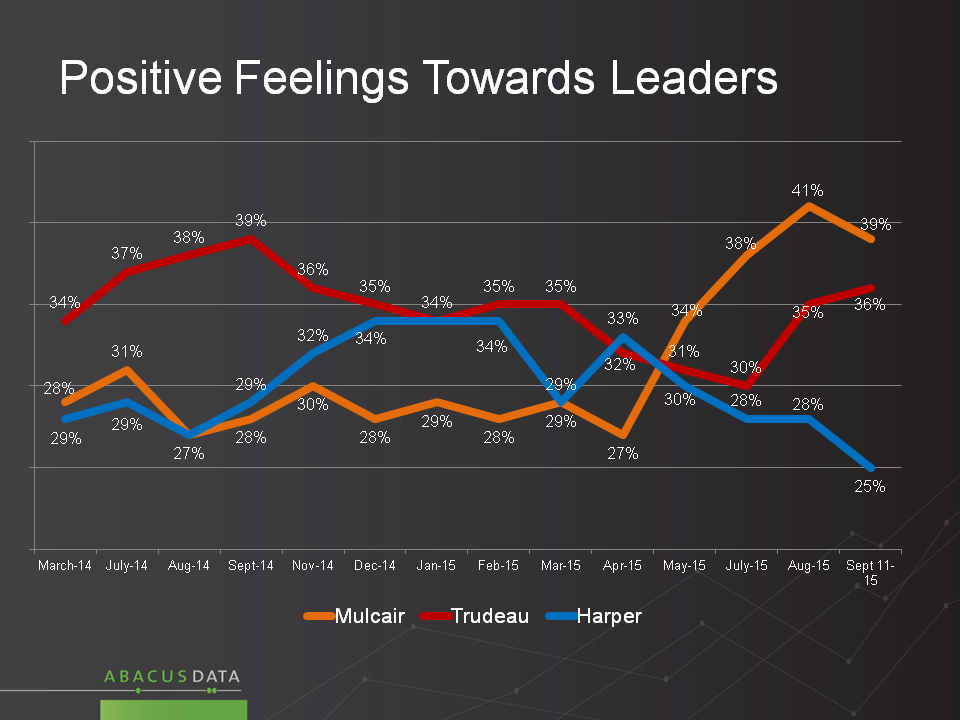 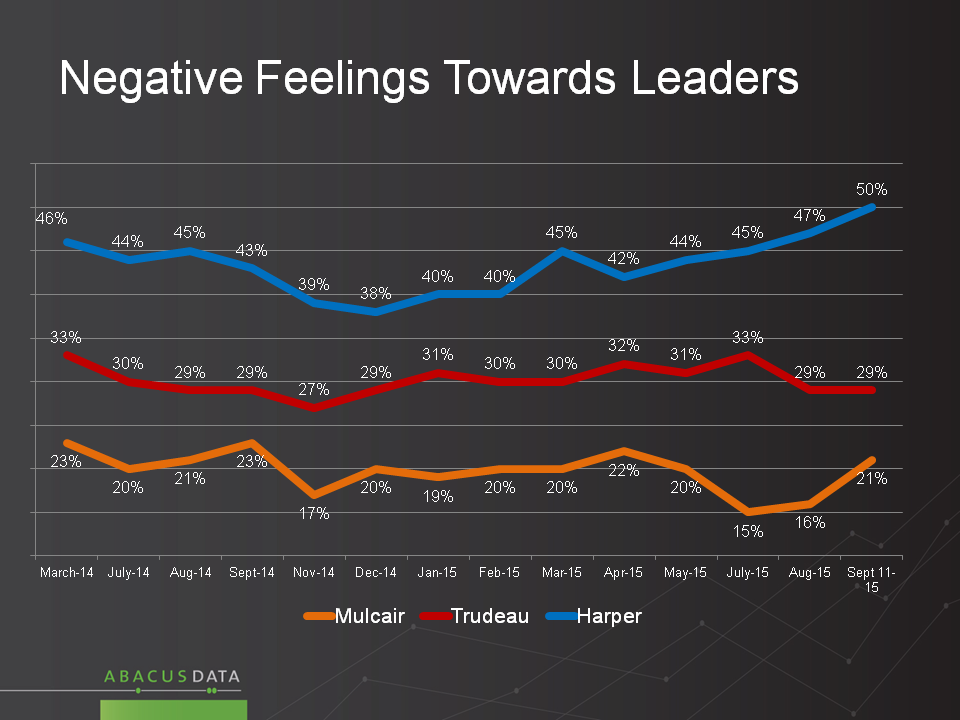 What to make of the leaders?

We asked the same three questions about each leader: how much do they want my vote, how close are their values to mine, and do they have new ideas about how to improve the country. The results paint a picture of how voters see their choices.

Both Mr. Mulcair (54%) and Mr. Trudeau (57%) are seen as really wanting to “win your vote”, compared to 34% who say the same thing about Mr. Harper. 36% say Mr. Harper “really doesn’t care if I vote for him” about twice as many who say that about the other leaders.

When asked about their ideas, only 18% say Mr. Harper has new ideas about how to improve the country, compared to 39% for Mr. Mulcair, and 43% for Justin Trudeau.

Because the way partisans feel about their party’s leaders can have a lot to do with their determination to turn out and vote it is worthwhile to look at how each party’s supporters rate their leaders on these questions.

Conservative Party voters are least likely to say their party’s leader really wants their vote (67%), has values pretty much the same as theirs (46%), and has new ideas about how to improve the economy (52%).

Liberal Party voters are at the other end of the spectrum, with 85% saying Mr. Trudeau really wants their vote, 56% say his values are pretty much the same as theirs, and 80% say he has new ideas about how to improve the country.

Mr. Mulcair’s ratings among his party’s supporters are significantly better than those of Mr. Harper, but not quite as strong as those of Mr. Trudeau.

To find out how voters might evaluate a choice between Mr. Mulcair and Mr. Trudeau we asked people to compare the two on a series of measures.  (In our next wave, we will do a similar test including Mr. Harper and one of the other leaders).

The results show the two leaders are close together in public esteem, with all 11 items showing  a highly competitive race. Mr. Mulcair was preferred choice when it comes to:

Mr. Trudeau scored better for:
•    Motivating Canadians in a positive way
•    Taking good advice if it was offered to him
•    Doing the most to help the middle class

The choice is effectively too close to call (a 2-point gap from a 50/50 result) on:
•    Improving the way politics is conducted
•    Best foreign policy for Canada
•    Best reflect your personal values
•    Soundest economic policies
•    Best working relationship with the provinces

The difference of opinion between Ontarians and Quebecers is again evident, with Mr. Trudeau leading on five measures in Ontario compared with four for Mr. Mulcair.  In Quebec, Mr. Mulcair beats Mr. Trudeau on all measures except one (Do most to help the middle class) on which they are effectively tied.

Worth noting is that when we look only at those voters who say they will consider voting for either for the Liberals or the NDP (but will not consider the Conservatives) the responses favour Mr. Trudeau, who leads on 6 items, while Mr. Mulcair leads on 1 and 4 items are too close to call.

Among swing voters who will consider voting for either the Liberals and NDP but not the Conservatives, Mr. Trudeau leads 53%-47%. 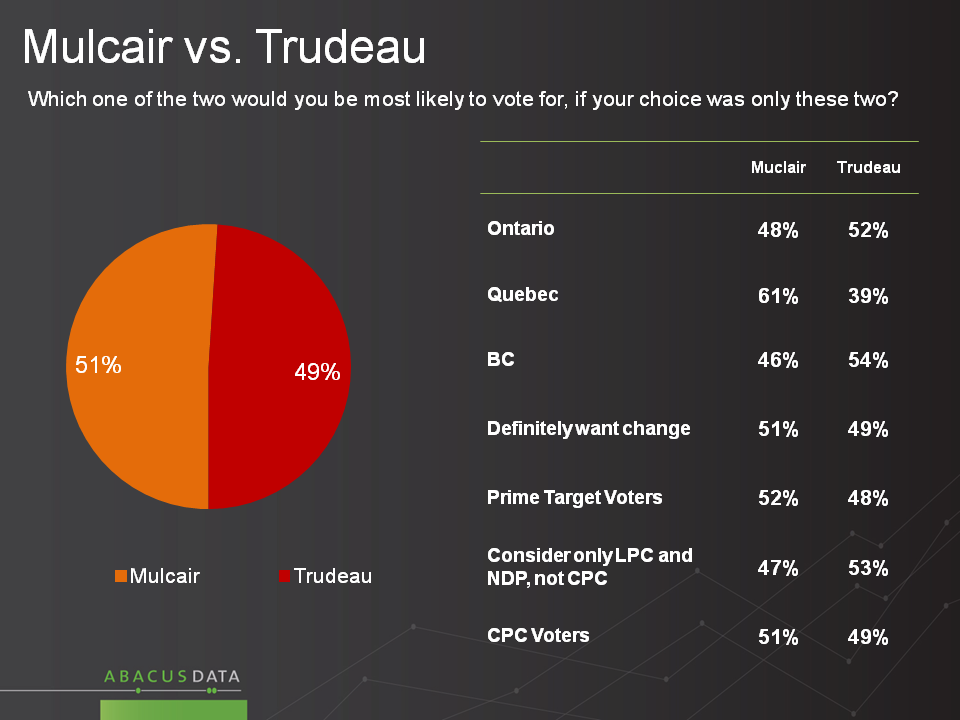 This election will be influenced by platform ideas, but the outcome will also have a lot to do with impressions of the individual who would be Prime Minister and about the values they share with Canadians.

The results show that Mr. Harper’s party remains competitive nationally, but that he is running well behind the other leaders in popularity and is not enjoying as ardent support among supporters of his own party as had been the case in prior elections, or as enjoyed by the other main party leaders.

The sense of Mr. Harper’s campaign is that it is not going as well as the others’, that Mr. Harper seems a bit more indifferent about winning votes, less aligned with the values of voters, and offering fewer ideas about improving the economy.  To win, barring a major failure by his opponents, he would likely need to improve these perceptions.

For those looking for a change in this election, the race between Mr. Mulcair and Mr. Trudeau is clearly narrowing.  The Liberal leader had surrendered a lead to the NDP leader, and now the balance is shifting in the other direction.  To understand the electoral implications of these patterns, it is critical to recognize the differences between perceptions in Quebec compared to the rest of the country. Mr. Mulcair maintains great strength in Quebec, where the NDP already holds a very large majority of the seats. His biggest growth opportunities are in Ontario, where the NDP holds a small fraction of the 121 seats contested this year.

In Ontario, Mr. Trudeau and the Liberal Party have become more competitive, and as the campaign rolls into its second half, enjoy a modest advantage in that province, and among voters who say their choice will come down to the NDP and Liberal Party.

Our survey, commissioned by Abacus Data, was conducted online with 1,500 Canadians aged 18 and over from September 9 to 11, 2015. A random sample of panelists was invited to complete the survey from a large representative panel of over 500,000 Canadians, recruited and managed by Research Now, one of the world’s leading provider of online research samples.

The Marketing Research and Intelligence Association policy limits statements about margins of sampling error for most online surveys.   The margin of error for a comparable probability-based random sample of the same size is +/- 2.6%, 19 times out of 20.  The data were weighted according to census data to ensure that the sample matched Canada's population according to age, gender, educational attainment, and region. Totals may not add up to 100 due to rounding.